Both of these involve changes that are not specific to the games they were targeting. So, other games might be affected, but I haven’t spotted any differences in the handful of games I tried.

I made some updates to the publishing tools in the 4DO repository, this includes a fix in which the SlimDX.dll file was in the “Tools” directory in the zip file (this was seen in the original 1.1.6.5 zip file uploaded, but was later fixed).

There are no functional changes in 1.1.6.5 beta. This release provides the introduction of the 4DO installer. If you find an issue, please provide feedback!

4DO will continue to provide an option for the Zip file distribution, since many people prefer that option. As you can see on the download page, each release will now provide two ways you to download and use 4DO:

I dug into the CEL rendering logic and documentation enough to understand the bugs causing Wing Commander 3’s video issues. It took the whole week! I finally saw the resulting clean images at about 4:30am last night 🙂 . 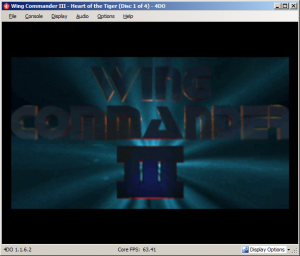 More languages supported with this update!

Thank you again to Viktor, “money”, Enio Marconcini, and Benjamin Siskoo for taking the time to translate the interface elements!

4DO should default to your system’s default culture. In case you have a different preference (or something goes wrong), you can always set the culture via the “Options” menu. Your default culture is used to append text on the language menu items in case you choose one you can’t read:

4DO now can support multiple languages!