Viktor, who has contributed numerous 4DO improvements (including core emulation fixes), has been working on an android version of the emulator. He has been hard at work and could use your help with beta testing!

Viktor has a forum thread on the topic, please get in touch with him if you’re available to help!
4DO Android: Forum Thread

If you’re unavailable to help with testing, perhaps just say hello and cheer him on! 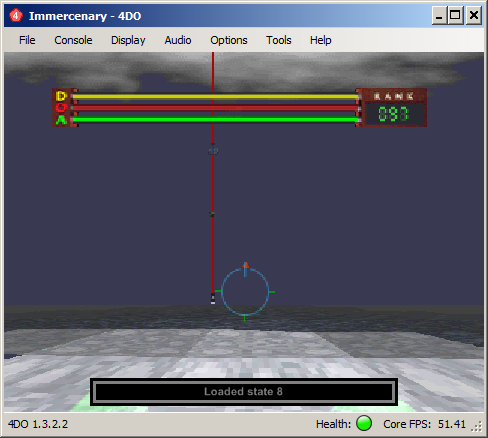 4DO will soon support multiple languages. To support a specific language, we need the program’s resources (the textual data) to be translated.

There are already current volunteers for English, Russian, and Portuguese.

If you would like to see another language and are willing to help add translations, please head to the related forum post for instructions, and message me in there (rather than here on WordPress where your email address will be public!).

The fourdo.com site has been moved to new web space.

Now that the move is complete, I’ve added a both a forum and a wiki. I don’t have particularly grand plans for either of these, but here’s the immediate main use for each of them:

If you are interested in helping me out by moderating either the forum or the wiki, please let me know using a private message in the forums.
fourdo-admin August 28, 2011 6 Comments

It’s been a long night. I attempted to create a setup package for 4DO, which by the looks of it will be using SlimDX. To start off, I sought out to install just two things: C++ 2010 runtimes and the .NET 4 framework. Little did I know that I was in for some real punishment when I decided I wanted to have a single all-encompassing “.exe”.

I started with the visual studio installer. I quickly discovered how very clumsy that worked, so I broke open Wix, which I hear good things about. It was long before I ran into a dilemma with x64 and x86 thanks to the C++ 2010 runtimes. I solved it by opting for a 32-bit and 64-bit installer, but I’m unhappy with this.

The real disillusionment came with the “built-in” visual studio bootstrapper. Why does their bootstrapper not gob everything into a single “.exe”? On top of that, why is there no option to do so? It’s not 1995 anymore, people are not installing from CD these days!

And then I found IExpress.exe to bootstrap the bootstrapper, which is an absolute joke, but I managed to get it “working”. In the end, there’s an installation for 4DO that both includes and installs the .NET 4 runtimes and the MS C++ 2010 runtimes. But, SlimDX is not yet included, and there’s still a 32-bit flavor and a 64-bit version of the installer. Also, thanks to those dependencies, the installer is 45 megs.

Ugh, what a nightmare! I am convinced that I need to start over and look into Inno or NSIS for creating a more reliable installer. I definitely would prefer to have a single installer for 32 and 64 bit.

Well, the good news is that I have made progress on the joystick support.

I personally have always hated it when the input configuration for an emulator is clunky or limited. The new input settings interface combines several features that I feel have been useful to me with other emulators:

Just to be clear, it still only supports one device. I will probably release 1.0.5.0 without support for additional devices.

First of all, thank you for the feedback and the friendly encouragement!

Just so you know, I intend to add joystick/controller support next. Two player support is also important to me, but I will probably be leaving that for later (at least until beta).

Currently 4DO is “alpha”, and I intend to enter “beta” after:

I have been mentally separating alpha and beta by figuring that in alpha any of your save states or settings may be lost from one version to another. Once it’s in beta, I intend to keep that to a minimum.

Altmer provided me with some helpful information. He tells me that the FreeDO source that is available on google code includes many of the improvements from FreeDO 2.1. As far as 4DO is concerned, that’s great news.

He is also working on a “new” emulator. New as in not FreeDO. One of the things he intends to include is the hardware accelerated graphics (which I referred to on another thread). I don’t really know what else the new emulator involves other than a rewrite. He also figures it would be difficult to work together on it. Considering the language barrier, I have to agree. Altmer provided clarification that his new emulator will NOT be open source, but that the interface to it will be. He also said he could try to keep the interface similar to the one FreeDO had so that I could more easily use it with something like 4DO. That’s a minor point. But, that’s all the info I have.

So, it looks like there is no FreeDO development going on whatsoever, and FourDO is using the latest copy. Altmer is working on a new, different (low-level) emulator, and meanwhile I’m adding features to 4DO to basically produce a more swanky version of FreeDO. Hopefully some day in the future, Altmer’s new emulator is released and a clear improvement, and 4DO or something like it can help out by plugging in and padding out the interface with features. As far as I know, that sums up the only 3DO emulation development going on in the world.

Back in 4DO land, I have been working on getting CD-Rom support online. Some games load just fine. For some reason, on other games I’ll get a “give up” error visible on the screen after it fails to load. I think this may be the copy protection I’ve heard about. I have noticed that 2.1 FreeDO does not have the problem, so I am going to try to iron out what I’m missing.

I believe I figured out what’s going wrong with the XP crash reports. Turns out it was rather simple. I’m a little irked about the misleading error message we were getting

On the machine I recreated it on, it actually was due to being unable to find c++ runtimes. I’ll update my original post to point this out as a dependency. You can get those here:
http://www.microsoft.com/download/en/details.aspx?id=5555

I do not have any 64 bit machines, so I’m unable to try any out myself. But, at least one chap sent me his crash details, and it should be the same. So, this may also resolve the issues on 64 bit machines.

My XP machine also got a crash on WaveLib, but I’m pretty sure I don’t have a sound card in it.